A blackberry liqueur made from a maceration of foraged wild blackberries. 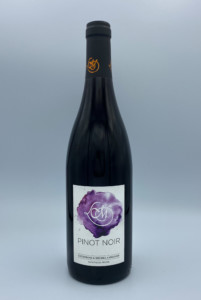 Catherine and Michel Langlois settled in Pougny in 1996 with little more than the 0.3 hectares of vines they inherited from Michel’s grandfather. The first vines were planted in the 1950s as one part of a polyculture farm. Over the years the husband-and-wife team decided to focus on winemaking and grew the estate to its current 17 hectares. They now produce wines and fruit cordials with the help of their three sons. Traditional varieties of the region—Sauvignon Blanc, Pinot Noir, and Gamay—are the focus here, with a commitment to showcasing the unique, but not particularly well-known Coteaux du Giennois appellation. Long in the shadow of its more well-known siblings Sancerre and Pouilly Fumé, Coteaux du Giennois makes similar but considerably less expensive Sauvignon Blanc-based wines worth seeking out. The climate is mild and maritime with some continental influence, and the hill of Sancerre acts as a natural barrier, creating a unique microclimate. The Kimmeridgian marl subsoil is full of tiny fossilized seashells dating back 150 million years. In addition to grapes, the Langlois family farms 2 hectares of black currants used for cassis production, and forages wild blackberries for their crème de mûre. The estate earned its organic certification in August 2022.